I had my 5-month post-op appointment on July 9th. I braced myself for the worst (i.e.: another steroid injection in my right boob). The doc came in to check me and said I looked good, even though I did have a slightly pink spot under my left areola. I finally had my phone charged during my visit and could show him the photos of those weird, itchy bumps I get randomly and then disappear. He said I probably developed an allergic reaction to something (what’s new) and asked me if I’ve eaten anything out of the ordinary, or ever been allergic to latex. I said, “I have been eating a lot of fresh parsley.” He chuckles and says he doesn’t think it’s parsley, how about latex? I said I’ve never been, that I know of, but he said I should be careful, just in case.

Then he did that test where he presses his fingers into each side of my breast…and lo and behold: no pain!! 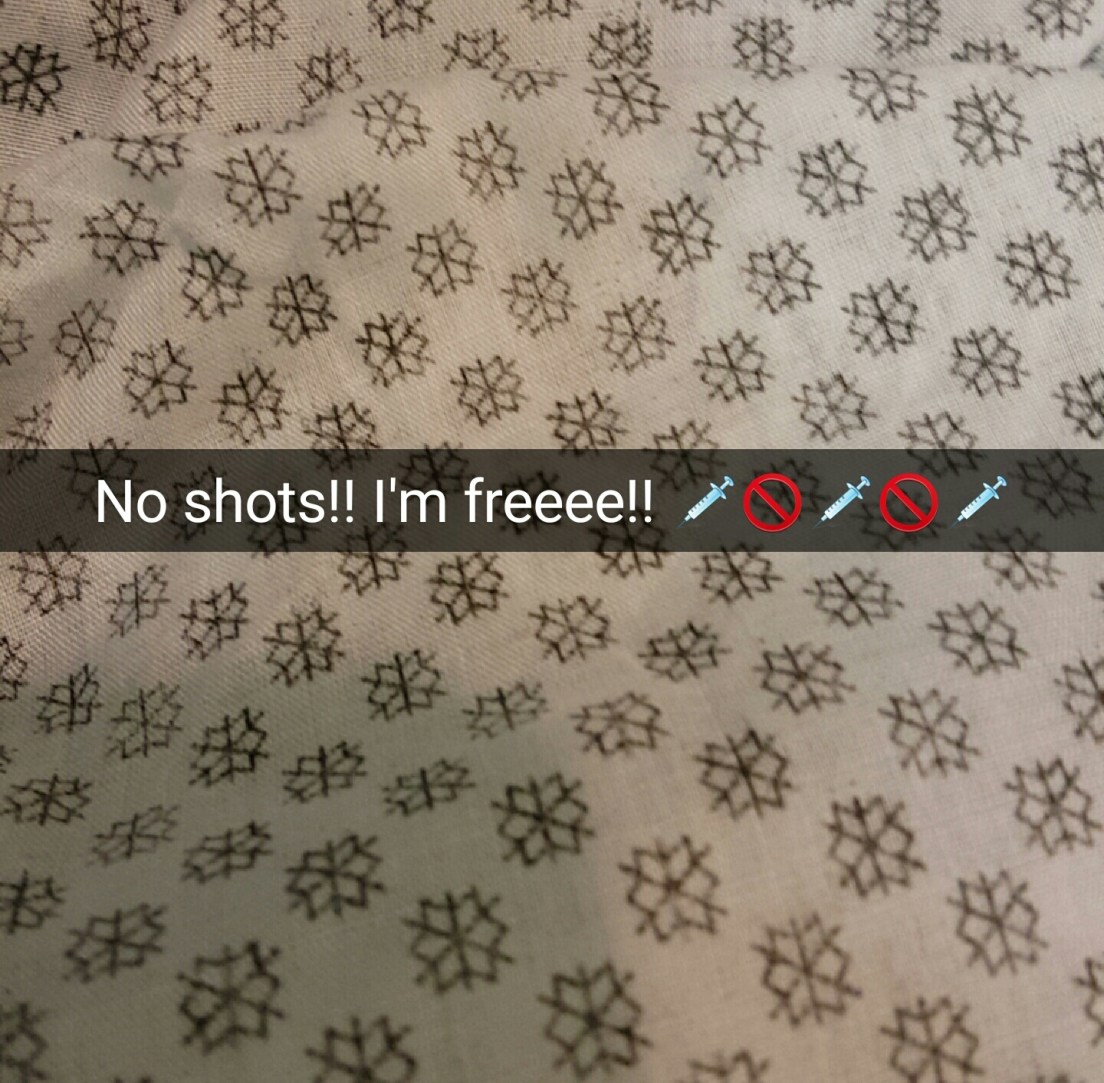 I practically skipped out of the office. I was thrilled.

The next evening comes and that pinkish-red spot under my left areola is brighter, but I feel no pain. Jorge checks me and says I should go back. I said yes, I’d call the doctor the next day. But I’m super busy at work and forget to. When I take my clothes off that night, the spot looks even worse, this time with a pale, almost whitish area in the center of the red spot and I’m so paranoid the first thing I think is “PUS!”, so I call the doctor the next morning. They schedule me that same afternoon and I go in.

There are tons of people, and they eventually get to me. I was the last patient it seems. The doc finally comes in and checks me and says, “It looks like there’s something in there, we’ll transfer you to the other room.” The room with the examination table. Ugh. The doctor tells me to lay down with my left arm above my head. A nurse hands him a scalpel and he attempts to pierce me 3 times before he succeeds. Tears were involuntarily running from my eyes and I couldn’t stop. No anesthesia or anything to numb the area, I was so upset. Then he has to squeeze whatever’s in there…and it’s even worse!! Worst. Pain. Ever. I ask why this happened–was it from working out or cause I’d been sleeping on my side or what?? He says no, a suture must have still been in there and it never broke down and tried expelling itself so it became infected.

He says he’s going to have a nurse pack the lesion…and it was as painful as it sounds. She shoved a piece of gauze in the literal hole that he’d just dug and it hurt so bad. She put gauze and tape and pressed down and I cringed and squealed. She said, “That hurts you?” Um, they just stabbed me with a scalpel and pinched the crap out of my skin, so yes, it hurts! This is around the time I heard someone yell down the hall, “It’s already 5:00??”

I asked if they were prescribing antibiotics. She says no, to use Neosporin or Bactroban. No instructions on when to take out the packing or anything, and I was so distraught I forgot to ask. I’m walking out the door into the parking lot and by the time I realized they forgot to give me my appointment and I turned around to ask, all the ladies were outside, standing in front of the locked doors. One of them says, “Sorry, we’re closed.”

I was so upset, that for the first time ever, even after alllll the complications, I said, “Why the heck did I do this!??”

I got weird pains in the incision area and above my areola near my collar bone. I had to take Ibuprofen for the pain all evening and the next day.

Since I’d gotten no instructions, I had to Google what to do the next morning about when to take the packing gauze out and how to handle it. I was so annoyed and worried I’d do something wrong.

One of the nurses called with a “courtesy call” to give me my new appointment and with another the day after, Friday, to ask how I was doing. I said I was in pain, and that the spot was red but it may be bruising from the squeezing. She asked if it was hot, but I was outside at the Food Park with EZ and Ryan getting ready for our event that night, so I wasn’t sure if it was me or the already-gross temperature. She said not to worry, she had called in antibiotics. I would have thought it would be better to prescribe them, oh, you know: 2 1/2 days before…

So I was really careful, using brand-new towels after showering and washing my hands extra well when changing dressings. By the time I went back on Monday it was closing up, thank God.

Had my follow-up appointment today, Wednesday, August 3rd, and have improved 100%. I just hope I don’t have any other surprises so I can finally start–and continue–to work out!! This is the 4th time the doc “releases” me.