It’s been 8 months since I decided to go under the knife. I didn’t update last month (month 7 post-op) because I was feeling pretty good and didn’t want to jinx anything.

I’ve had little to no shocks of pain lately. I used to get them a lot around the areolas. Sometimes I’ll still get a sudden sting in the same area I was drained on month 6, but it’s nothing major.

I’ve even been sleeping on my sides again, but I have to be very careful to not squish my boobs. On the actual day of my 8 month post-op anniversary (the 10th), I had some pants to return at JC Penney so I went bra shopping after my epic fail a few months ago (nothing fit comfortably then and I couldn’t figure out my size!). 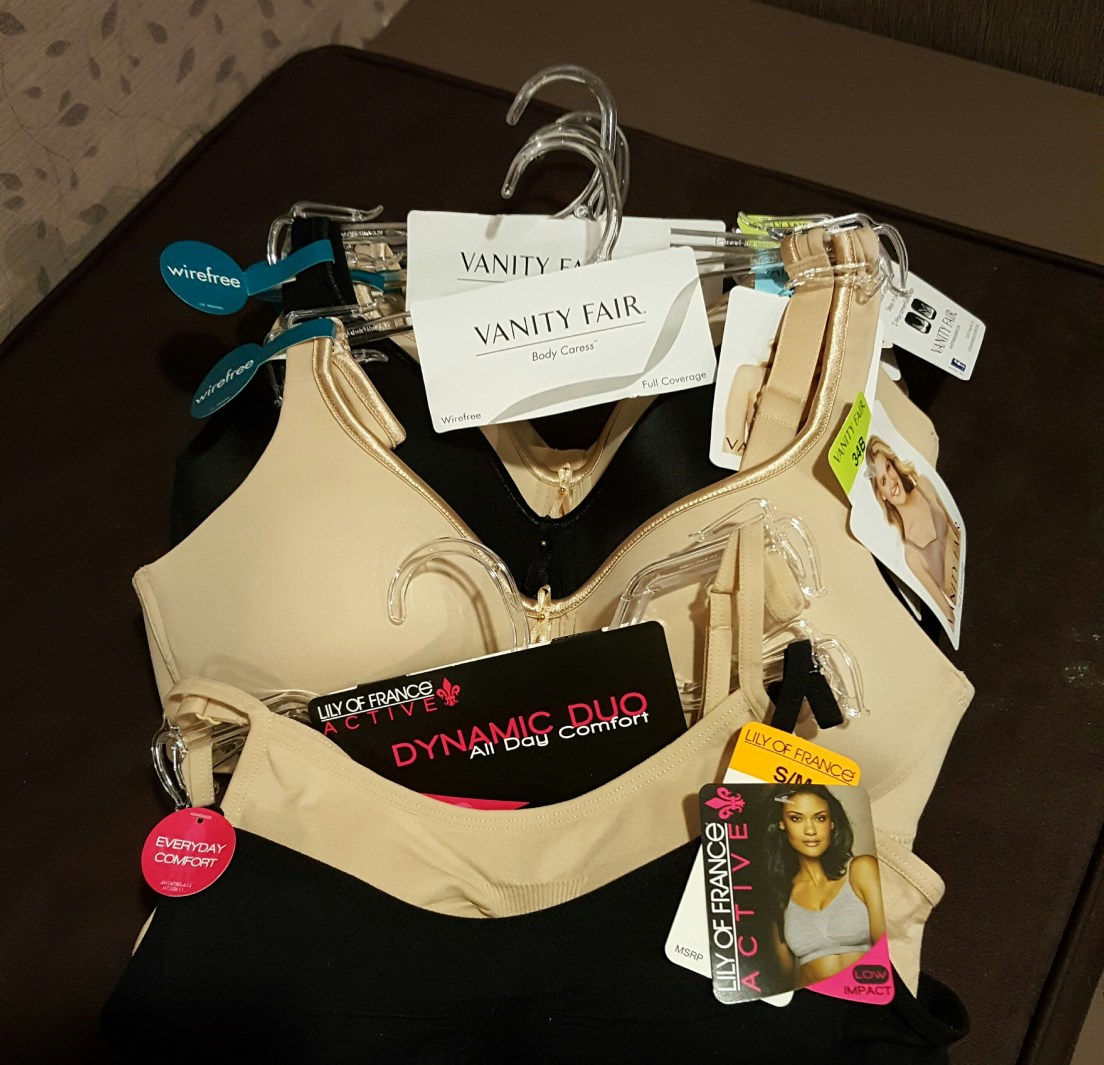 And this time, I still couldn’t figure it out!

It’s either a C or B (down from DD) but I felt like everything was pressing on my incisions (even though I only tried on wireless bras) and it was giving me anxiety! I could also see lines of chub on my back (a direct result of not being able to run or exercise!!), so I said screw it, I’m keeping my cotton sports bras! I’m more comfortable anyway!
I went running on the 11th and felt pretty damn awesome! My heavy-duty running sports bra wasn’t too constricting and I didn’t feel stretching on my boobs when I ran fast. I had just been thinking about how I hadn’t gotten those weird, red, itchy, mosquito-bite looking welts in a long time! But lo-and-behold, when I got home and took my bra off, there was one on the side of my left boob above my incision! I still don’t know what the heck causes that! Sweat? My blood pressure being elevated from running? The bra itself? Who knows?

But all-in-all, I can’t complain. I feel comfortable and am braless as soon as I get home from work. I just hope it doesn’t backfire and I make my bewbs all wobbly!! Can that happen??

Sorry, thinking out loud. Anyway. If I could just get myself to work out daily again and not have some kind of mammary-incident, that would be great!! I was doing P90X, Yoga and running (occasionally) before that infection on my incision happened, so I’m hoping to start again soon, and hopefully with no problems this time! I have a Halloween Costume and 1920’s themed event I have to dress up for!

My Mother’s Day weekend started a bit early on Friday, with Emmos presenting me with a beautiful magnet frame for my fridge

We had movie night that night, and I managed to fall asleep during the latest Star Wars movie. The parts I saw were great tho!

I skipped yoga the next day (after much rolling around in my sheets debating how long to “sleep in”) but I eventually got up and got ready…only to sit at the kitchen table drinking coffee 😆 .

I took Emmos with me and we searched all over for the small Peppa plushes for Charlee. They were out everywhere. But we did find this:

We did all our shopping and errands and then we got home and I got the 3 little ones ready to go to Charlee’s party. Before we got ready to leave, Julien runs to me and says, “Happy Mother’s Day!!”:

I immediately choked up; I felt overwhelmed and just surprised! I put it on the fridge proudly, next to Emmos’. He brought me a little poem, too, with handprints and a painting of a vase with flowers in it (the buds were his little hands!), but I told him it should be for his 1st Mom. I didn’t know how to take his reaction; I didn’t want to offend him, but I figured she should have something, too, from him. I know I would want to. I did take pictures of him with the poem and painting and I said, “There! Now we’ll both have one!”

So after adjusting my mascara and swallowing down the lump in my throat, we were off 🙂 .

They had so much fun at Sally’s! She always comes up with cute games for them and they love it. And Charlee looked adorable, of course!

I had a great time, too, catching up with Sally. I love spending time with her!

We got home and just as I changed into my lazy clothes, I get a message on Facebook stating that I won a Mother’s Day contest pack from Xquinkles Snack Land!! I never win those social media contests so I was thrilled, and hello?! Who wouldn’t be thrilled over this:

I took half the brood with me; the others stayed home playing video games with Dad 🙂 .

Then we got home and watched The Jungle Book–which I passed out during as well.

The next morning was officially Mother’s Day 🙂 . Jorge woke me up with smooches and told me to stay in bed, so I obliged 😆 . Then he and the girls woke me up and I was greeted by these beautiful, drowsy faces:

My love and the kiddos didn’t make breakfast that morning, but he did bring the next best thing: menudo and barbacoa!!

So we ate, and then I was allowed to lounge around all morning until we got ready to return some stuff (can you believe the tunic I’m wearing in the photo was $5??) and then we went to visit Gramma:

She was doing good, thank God :). She’s recently moved to a new facility, per her request, which shocked us all. So that only means she really didn’t like it at the previous place before 🙁 .

We got home and Aunt Nora and Linda came to visit. Then we lazied around the rest of the day. It was just awesome, and low-key with all the kids, Mom and my love. John was around for a bit, but disappeared to study. We watched Grey’s Anatomy with the kids the rest of the evening until I passed out on the sofa.

As for gifts, I did a satisfying amount of clothes shopping 🙂 . Plus my love got me this:

I had such a great day yesterday, that I actually didn’t mind having to wake up at 5am this morning 🙂 . And dropping the kids off was a piece of cake on our way to school/work and the day went by fast and was a breeze! I even applied for a grant (with my co-worker’s advice, of course!)