So my little brother graduated from UTRGV yesterday with his Bachelor’s in Health Science. To say I’m proud is an understatement. I wish I could have made a bigger deal about it, but he didn’t even want Jorge and I to take him to dinner, much less have a small party or BBQ. Plus, it freakin’ rained, so that put a damper on the whole deal (pun intended).

Mom and I went to visit Gramma as John got ready. She sent him a congratulatory video with me :’).

But yes, he was nervous–you could tell. But he got up there and received his diploma and even though he made a crazy face at the camera as he passed, you could see the relief in his face. The 7 years it took him to work and put himself through college. Moving out if his beloved apartment–the apartment he took me into when I had nowhere else to go after my divorce in 2010–and moving in with Jorge and me in 2013 to finish his last 2 years of school. His stress, his emotions–it’s alm over and it was worth it for him. I was glad to see the day come!!

I won’t mention the sh*tstorm it was trying to find him afterwards, the annoying rain, or the rude campus cop that ruined the end of the event for mom and I (okay, so I did mention it–whatever 😡 ), but it was great.

We got home, dried off, Jorge ordered us pizza and then I made this “Dump-Cake” for John.

It was the best, but I’m pretty sure we’ve developed diabetes and high cholesterol 😳 !

I usually get a sinus infection once every 2 years or so, and this week was it. I couldn’t even call in to work yesterday because we had our Unplugged event at the Food Park, it was cleaning day (so yay, jeans!) and I had a committee meeting for Food Festival. I also had Food Festival stuff to catch up on since I was absent a large chunk of Thursday. The event’s going really well, thank goodness!

I miraculously made it through the day. I definitely felt better than Thursday, but not 100%. I left the office for 30 minutes to pass the time before I had to be present for Unplugged. Went with EZ, Michelle, Rosie and Rick to SALT, after much convincing on Rosie and Michelle’s part. What can I say, I gave in to peer pressure 😆 . I’m on antibiotics and had taken Sudafed, and I knew better than to order a drink with alcohol, so I got a virgin cucumber Margarita instead.

Then it was time for Unplugged. The weather was looking scary; it became overcast and slightly windy in a matter of minutes. A couple of craft vendors even packed up and left! Then the clouds turned into puffy cottonballs and the weather cleared up.

I went out to the Park to speak with our artist and then joined Jorge (my co-worker, not husband) at the bench our group would chill at for the rest of the night.

The music was great, the weather was pretty perfect and the food was delish! 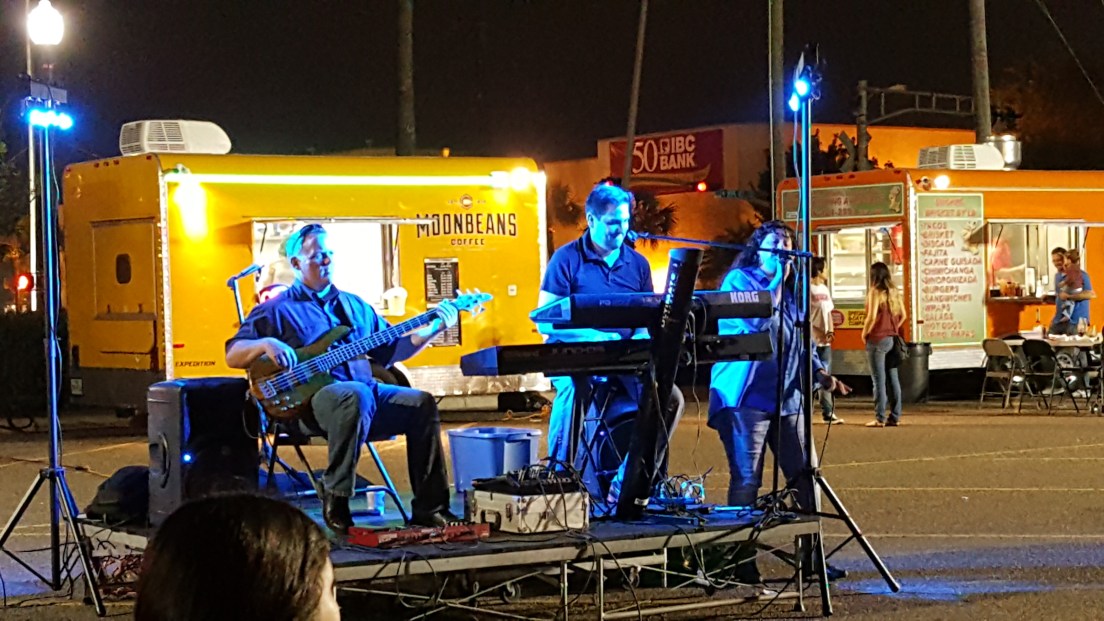 I went with Taqueria Los Brothers this time and their Nachos Locos and homemade lemonade was awesome. And on the house. They insisted I not pay! It was so well-served, my co-workers helped me eat them!

Rick showed us a photo a friend had shared of huge hail balls in Laredo, where Jorge was working. I frantically start texting him to see if he’s gotten any hail, because it was 8:30 and he STILL hasn’t told me he was coming home. He said the storm had actually passed south of where he was, but that he’d most likely be driving through it.

While we were sitting at our picnic bench someone came up to me from behind, held my arms and kissed my head. I was motionless and in shock, wondering what stranger had planted one on me. I slowly looked up and there he was, finally, thank goodness! Everyone laughed, because 30 minutes before everyone chimed in to tease that he was weathering the storm with someone else, or at a club, or hotel, etc. Jerks! They’re lucky I like them!

I slept so much better, and through the night, knowing my love was beside me. And I woke up feeling mostly normal! Mostly. Still have those darn hives, just not as severe as yesterday.

Trying to work up some energy to shower and visit Gramma, get a litter box for Diana, who is going to take Kika. Long story, but my Kiki will now reside with her 😥 . I also have several other things to do online, like pay bills, but I’m stuck watching Catfish on MTV 😆 . And Mom wants me to start working on the kids’ baskets, which means she’s going to see that they’re not “full” and is going to want to go shopping. Meh.