Pixydust.net has been renewed for 2 more years! Not that very much has been or will be done with this website, but I just can’t let the darn thing go. (As much as it creeps me out sometimes,) there are too many visual memories saved here and I just can’t do away with it!

We got a 3-day (surprise weekend) at work, so I was off since Friday. It worked out perfectly since the girls had their Veteran’s Day program. Alaethia and her cheer team were performing and Emily’s class was singing. I’d missed Alaethia’s very first performance last month since it was when we had that delegation here from San Miguel De Allende.

Anyway, Mom actually went along for once, and their dad, too. It was a quick, but very sweet and emotional program. Of course I got goosies and was all choked up during the National Anthem, and got teary again at the end when Mr. Guerra sang “God Bless the USA”. 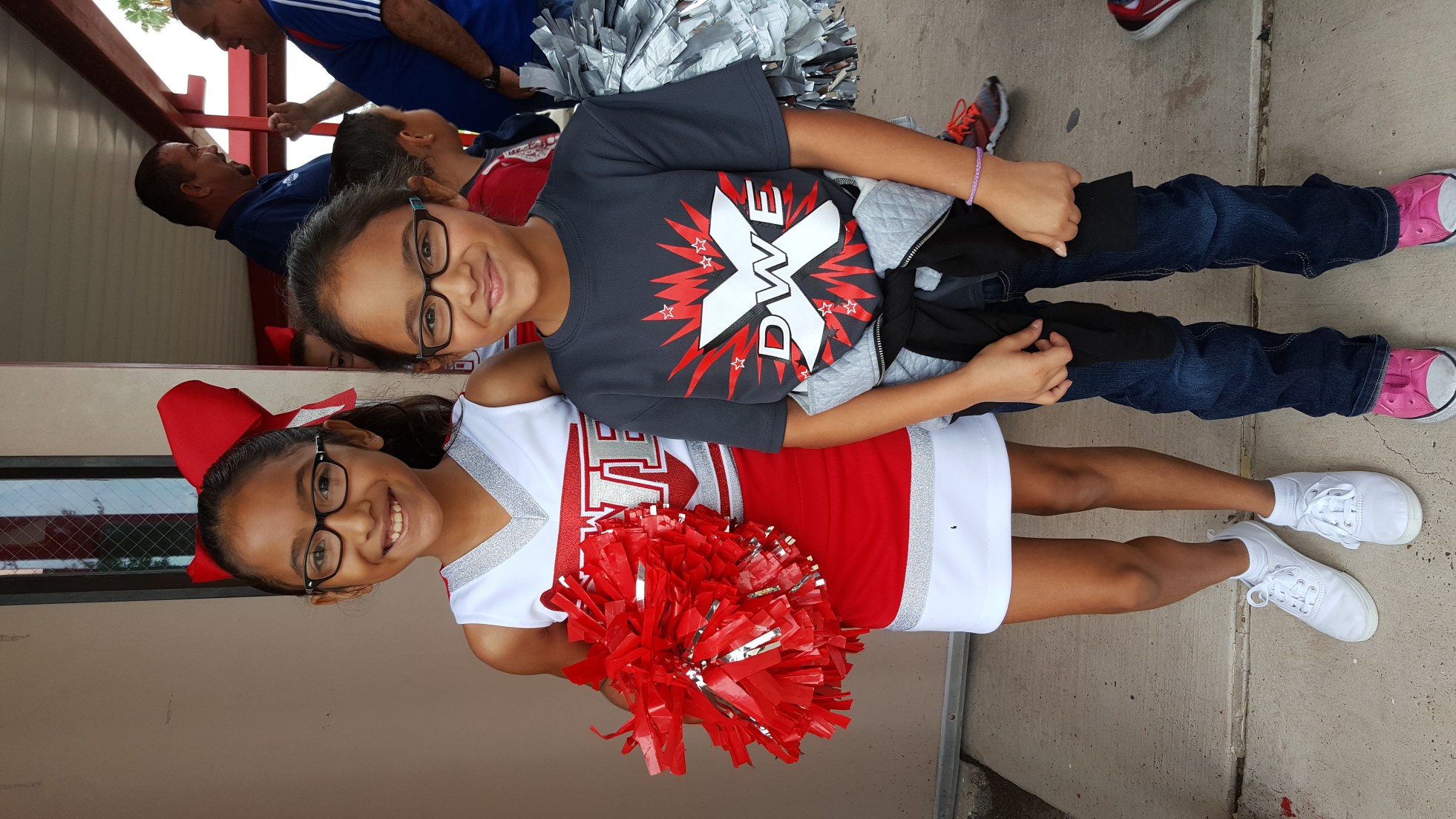 I didn’t get to take very many photos, especially because Emily was far and Alaethia was in the middle of her cheer team, but I snapped one when they were dispersing to their classrooms. Once I helped Alaethia change into her regular clothes, we hugged them goodbye and then Mom and I searched high and low for the new NES Classic console. I don’t know why I thought I’d actually find one, when all the crazies were out making lines at 5am 🙁 . I wish I could have been one of those crazies, but I forgot! Oh well. Maybe the next batch 🙁 .

Mom treated me to Wing Stop (those fries and nacho cheese. Mmph.), and then I dropped some off to Jorge, who was stuck at work without a chance for lunch.

I went back home afterwards and started taking down and wrapping up Halloween decorations. Mom went crazy buying little things here and there, which ended up turning into a dining table full of stuff to put away. I had to get another box.

I spent the evening watching Food Network and browsing Pinterest getting ideas on how to finish decorating my living room. Jorge and I decorated together when we moved in 5.5 years ago, but I wanted something bright and fresh that won’t break the bank. I started with dusting off two art pieces I had that I wanted to frame. So I went through my box of cheap Goodwill frames and found 2 that I would need to paint.

When Jorge got home from work he showered and then we had dinner at the Food Park!
We had our usual aguas frescas from Antojitos Beba and then we headed to Nuri Food Truck where I had a Q-dilla, Jorge had his favorite Devine Swine tacos and we shared the extremely delicious Bulgogi Pork Belly Kimchi Fries (Fries Carlito’s Way). They are literally finger-lickin’ good!

We went home and caught up on Grey’s Anatomy, and it wasn’t long till I passed out!

The girls had a UIL meet early the next morning, so I got ready, saw Jorge off and headed to their school to meet them and Mario.

It felt like time went by in a flash, then John (Audrey and Maddie’s dad) reminded me it’s because we used to have to stay all day for Chess! It’s a welcome change 😆 .

I saw my little ladies off when they were done with their stories/competing and I headed to Goodwill, for yes, another frame. I found nothing except Monster High and MC2 dolls for the girls.

I went across the street to Wal-Mart to purchase a bin for the Halloween decorations and ended up finding some AWESOME pillows on clearance that would match the theme I was going for in the living room in my head 😆 . They would match perfectly with my Otomí embroidered pillows I purchased from one of my awesome Artisans! I couldn’t believe my luck; they were $7 together!

I got home and started fixing things up, but not before I got bored enough to stop and meet Jorge for lunch :D. (I feel like my life really does revolve around food *sigh*.)

We went to Siempre Natural, where I had my usual turkey and bacon pita and fideo soup. I only ate half the pita and was so proud of myself. I dropped Jorge off at work and went straight to get my hair cut. It had literally been–wait for it–a YEAR since I’ve cut my hair. Jorge said if I didn’t go cut it THAT DAY, he and John would hold me down and he’d chop it himself!

So Ms. Rosie (my hairdresser) and I had a great, long talk while she chopped away at my hair. It’s still long (it was halfway down my butt; now it’s above it), but I should have asked for a more diamond-shape at the bottom like before 😕 .

Mom and I went to see Gramma and then to Walmart because I wanted to find another one of each of the pillows! After searching high and low (literally), I found one of the pinwheel ones. It’s something, at least! I got a few grocery items and then got home and made Jorge some lemon butter salmon and some zucchini noodles :).

After dinner, Jorge and I sat to watch TV while I paid all the bills online. He got to see first-hand just how long that takes me (almost 2 hours!!).

We woke up the next day and I made us some chorizo, egg and bean tacos with queso fresco. I’d bought some refrigerated tortillas from one of my artisans the week before, and he gave me 2 more packs! They are delicious.

We lazied around and then spent the rest of the day running errands, like purchasing bathroom repair stuff from Home Depot and then Jorge took me around 2 more Wal-Marts to find more pillows (only found 1 more pinwheel one, but for $2!! WIN!!)

We got home and he worked on the bathroom, while I stood by for support (and later tidy-up duty). I made dinner and we watched “The Walking Dead”, which I’d missed the week before. I was passing out before we could even watch the current one 😕 . Alas, as restful and productive as my weekend was, I could still use a whole other week off! It goes by too fast!