We had a low-key Father’s Day for Jorge, which is what he wanted 🙂 . I started his day off by letting him sleep in and making him a good hearty, fatherly breakfast 😀 .

We gave him his gifts as well and then we lounged around. Well, he lounged around, as he should on his day. I puttered around the rest of the day being awesome and doing laundry (though, I admit, not as good as he does it!)

My kiddos were picked up by Mario the night before to celebrate Father’s Day with them, but he brought them back by 3pm Sunday, just in time for the botana from Espi’s for lunch. 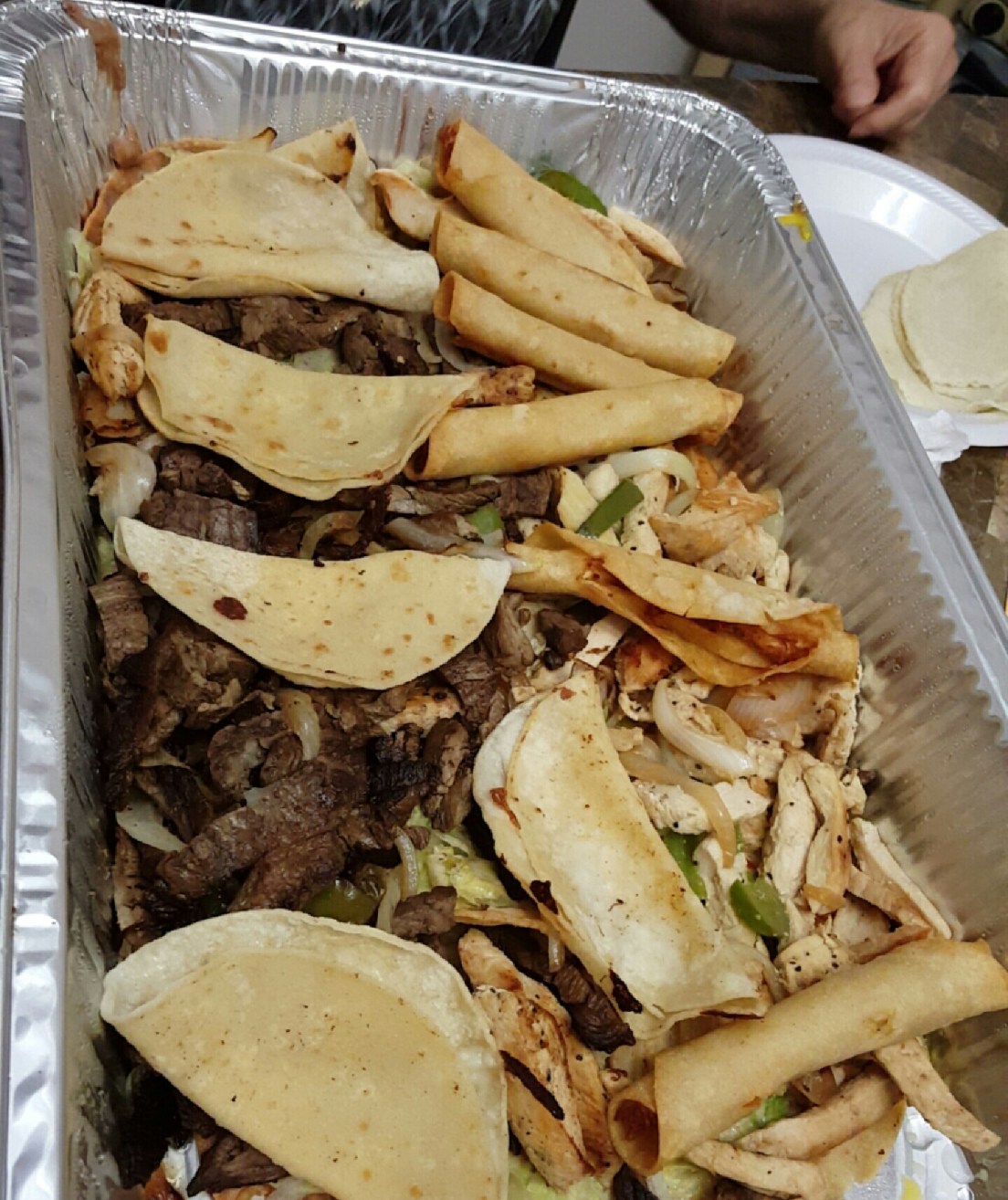 The girls gave my love his gifts (letters and drawings) they made for him. 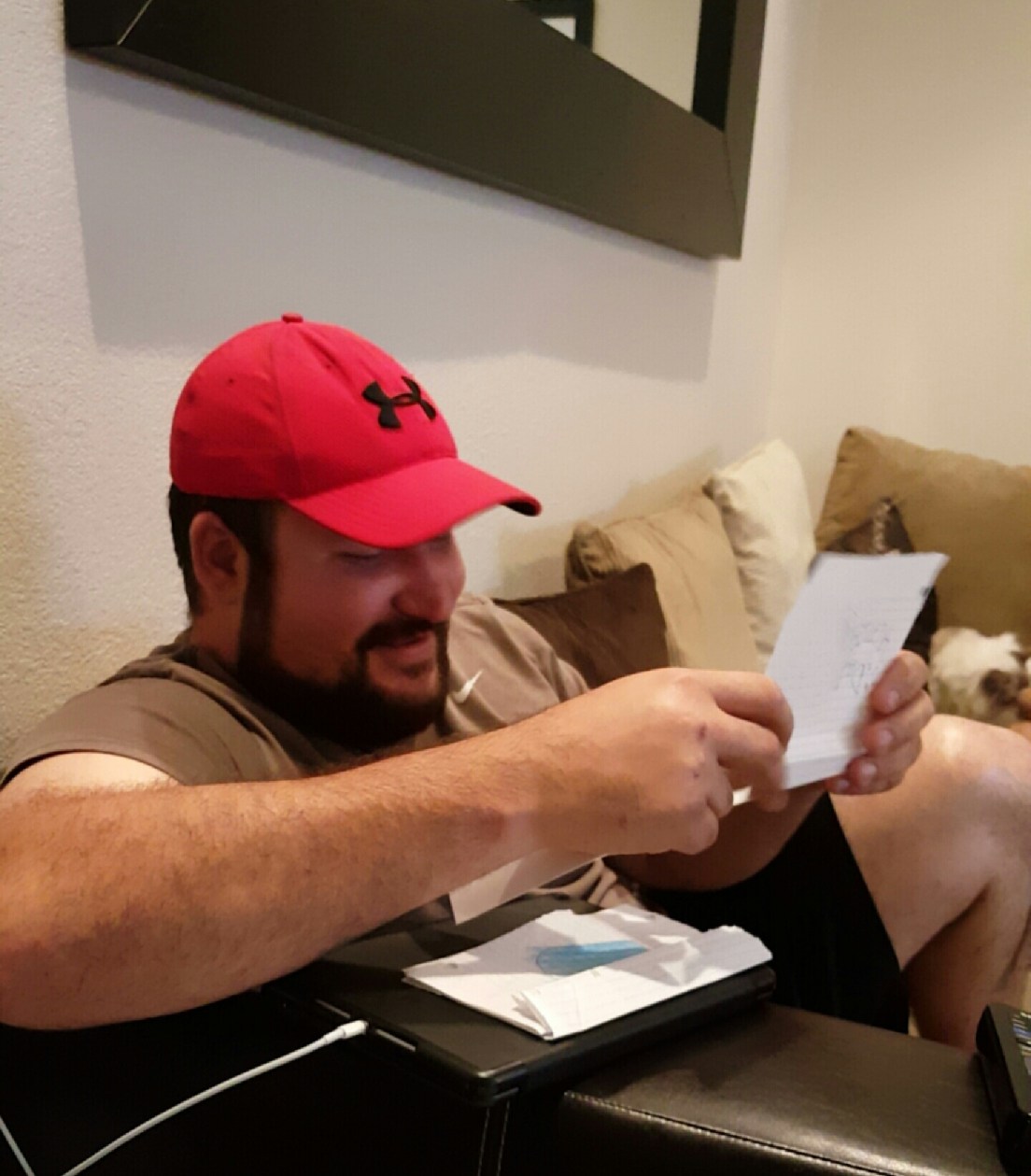 And then Emily went straight into Mommy mode and made everyone giant chocolate and sprinkles-covered marshmallows. 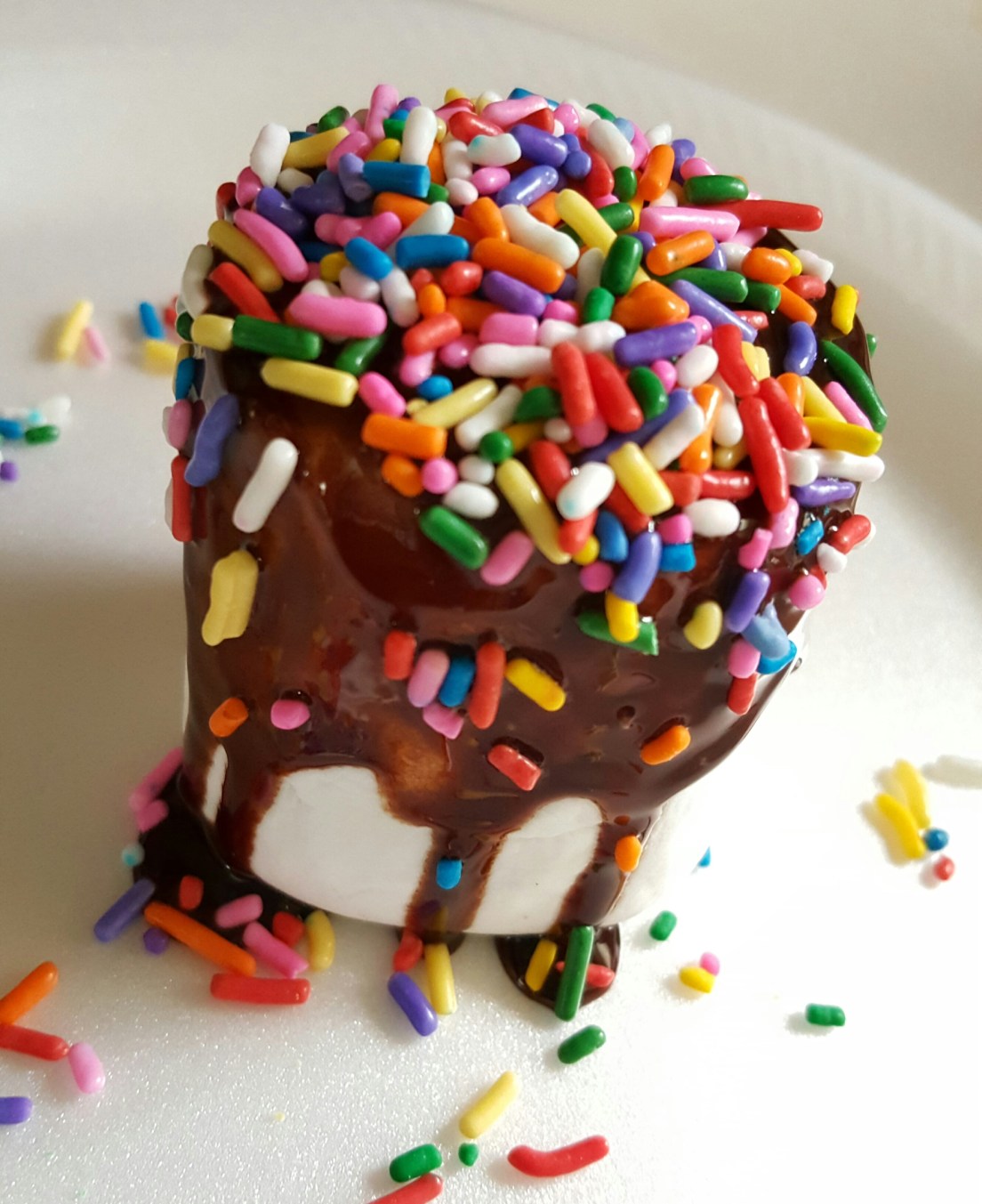 Then she made Jorge a Funfetti cake, all on her own, I just supervised and took the pans in and out of the oven.

She mixed, baked, iced, sprinkled and served it, all on her own. Brings a tear to my eye!

The girls (and sometimes the boys) take turns helping in the kitchen.

We watched Finding Dory, which made us all pretty emotional at the end. Emily and I actually clutched each other, in tears, and Alaethia ran to the bathroom, heh. It was a good, cute movie, though!

Eenan had an appointment Wednesday afternoon so I quickly finished my to-do list at work and was out by 3pm. I went to pick up Eenan and Emily, who wanted to tag along (my little shadow!)

I love that that little lady wants to follow me everywhere! Since she’s my “last” baby, I embrace it, as once she stops following me around, that’s it! No more babies to follow me! 😥 Anyway. That was depressing!

While we waited, we took Snapchat selfies. 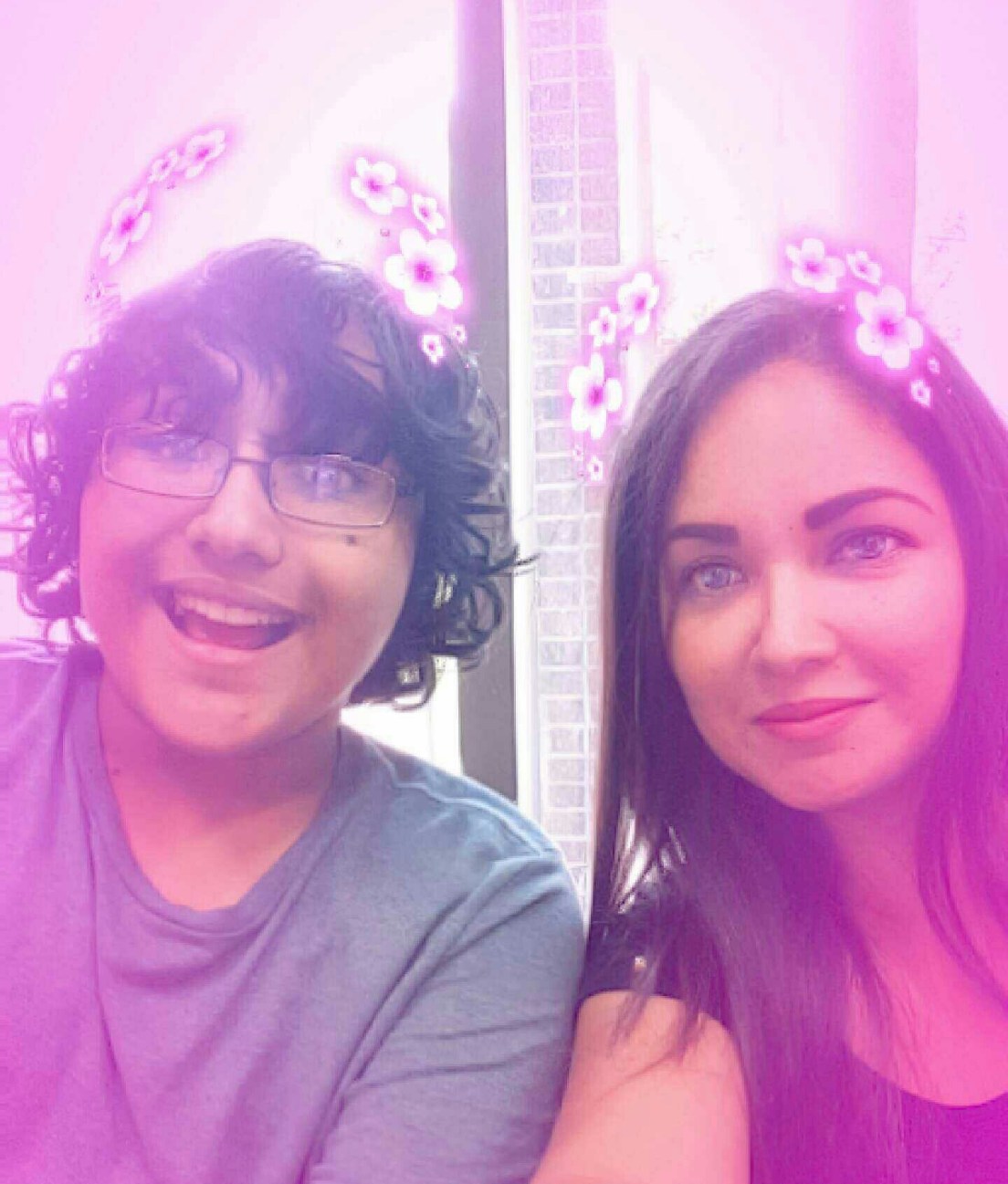 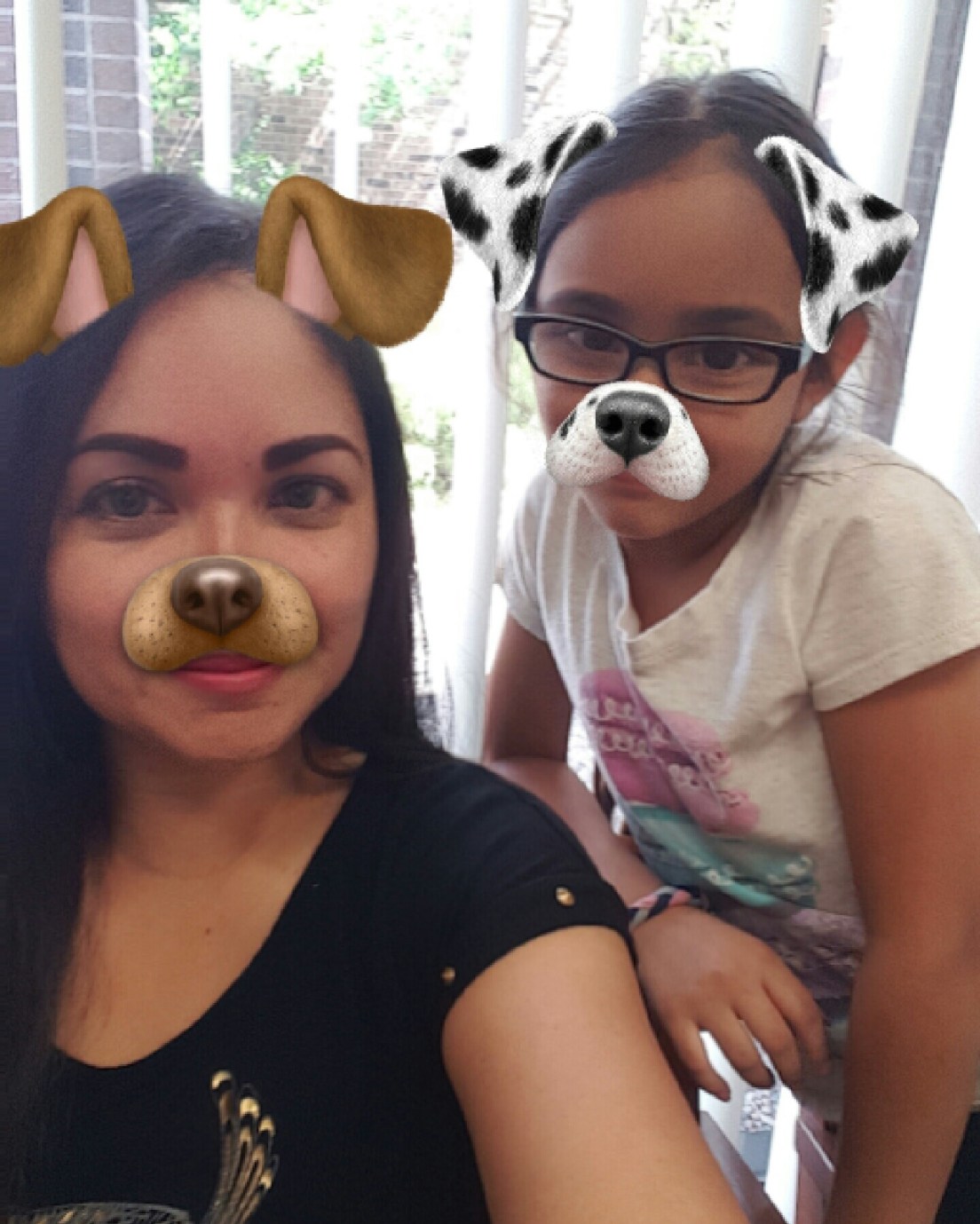 After the appointment, we went next door to Stripes because Eenan and Emmos wanted Flamin’ Hot Cheetos. And then I threw in some Butterfinger Cups, sour watermelon gummies and a Snapple, because they were on sale. Oh. Em. Gee. Someone must stop me 🙁 .

We visited Gramma right after and spent some time with her. Then I got home to make dinner.

I managed to go walking at the park 3 times out of the week and even asked the boys to go, but of course they had more important things to do, like play Playstation, or Xbox, or sleep (*cough* Eenan *cough*).

Right after I had my surgery, they kept asking to go running, which of course, I couldn’t. But now that I can walk briskly/run in intervals, they don’t want to go 😐 .

Wednesday night after I’d come back from jogging, Jorge accompanied me to HEB to get some water and milk. We ended up with a bunch of brownie mixes (they were buy one get one free!) and we already had free cookie dough.

So Emily jumped on the counter to mix the brownie mix and Jorgie and Alaethia pressed the raw cookie dough into the bottom of the muffin pans. The end result was rich and delicious and probably extremely unhealthy! We ate them while we watched a movie–I lie, I immediately passed out during the starting credits!

Oh Thursday, the day the other parents and us “switch” the kids, I had a doctor’s appointment and then I rushed home to pick up Jaylen, Alaethia and Emily so I could take them to Sky Park’s ribbon cutting. Eenan didn’t want to go so he stayed with Mom (typical) and Jorgie, Justin and Jules had already been picked up by their mother. Our work was specially invited to take our kids. Little did I know that jeans weren’t allowed, so poor Jaylen didn’t get to play, but he said it was worth the trip for the food alone 😆 .

The kids are on summer break, of course, but since I no longer have a job that allows me time off during the summer with them (well, since 2009 lol) I have to make do with the little time off I have, so we make the best of it!

Since the girls don’t have phones yet (and yes, at 7 and 9, they have already asked!) we communicate throughout the day on Pinterest messages 😆 . Love these kiddos! I need to make time to come up with activities to do with them and make some memories!

Our Easter this year was pretty low-key, and considering how chaotic work, and in turn, my mind, had been, it was a welcome change. Don’t get me wrong, I adore our wild family, but my in-laws weren’t coming down this time so we opted for celebrating at home.

The tiny ones and I started our Good Friday by going to a celebration at Gramma’s nursing home. We met Linda there. She texted me that they still hadn’t started. By the time we got there and found the location of the party, the egg hunt was over. Still, it was nice to see Gramma having fun 🙂 . 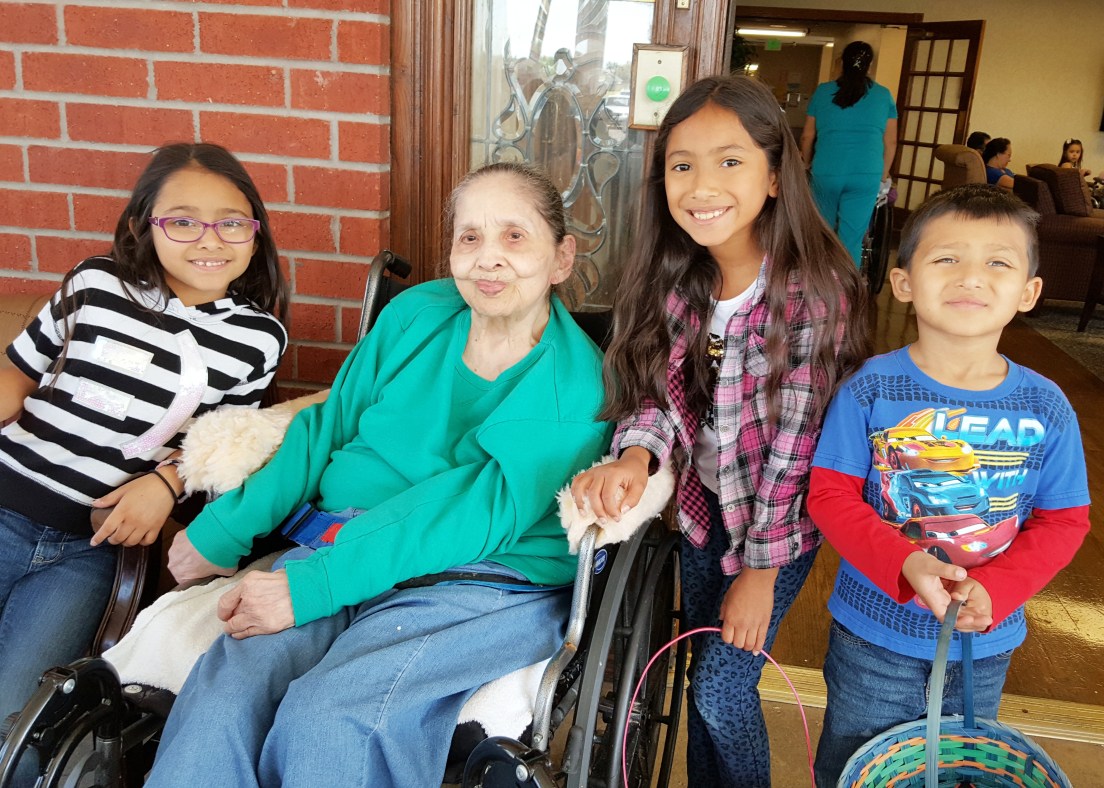 Jorge, Justin and Jules got picked up on Saturday afternoon by their mother so they could spend some time with her for the holiday. When I finally stopped being lazy, I gathered all of the egg-decorating supplies I got a great deal on last Easter and set the kids up on the back porch. Eenan, of course, was taking a teenager nap, heh. 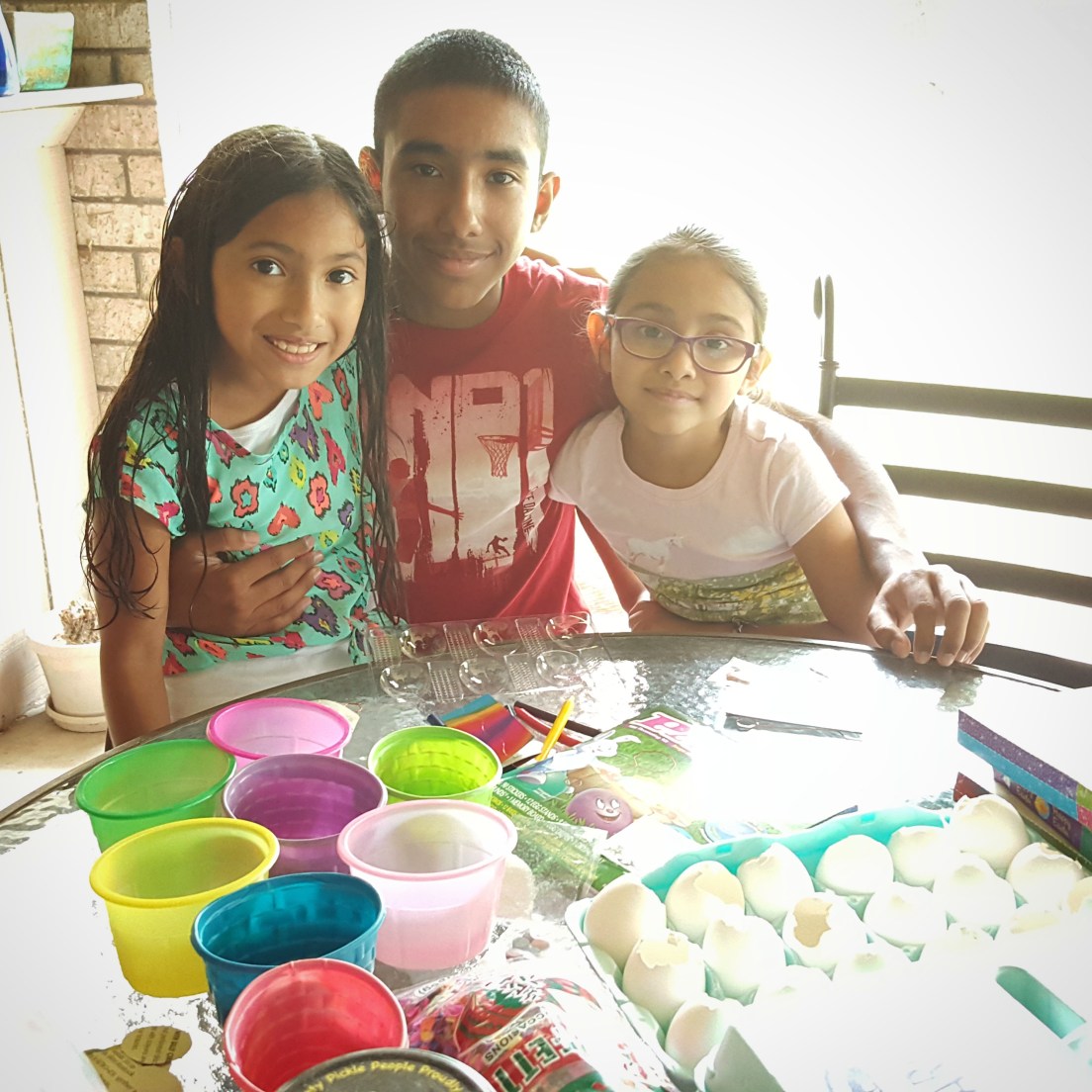 There was a melted crayon kit, but it made no sense so we did it our way: by melting a crayon with a lighter 😆 . 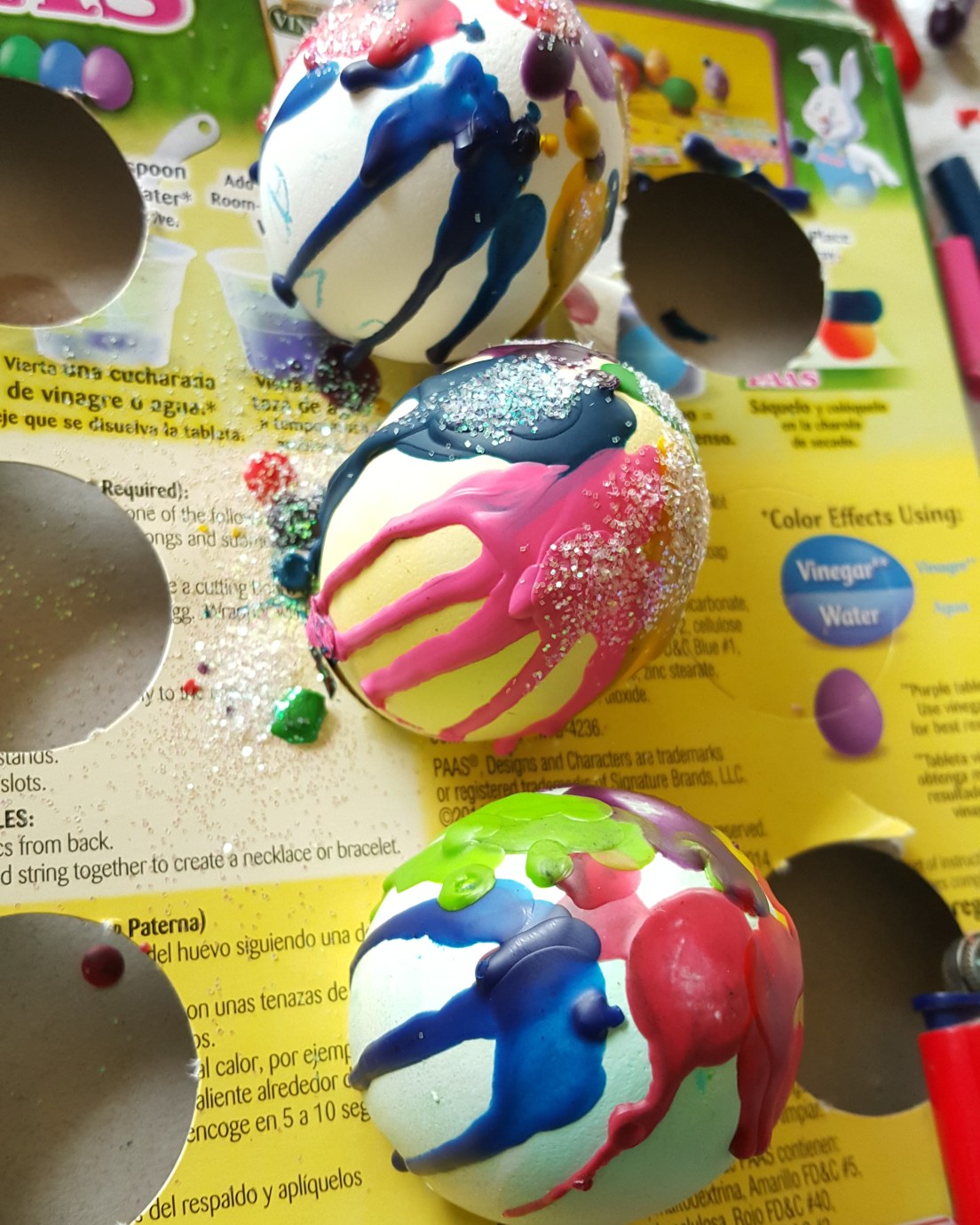 I made lunch afterwards and then Mario picked up the kiddos. Jorge got home from work and we reluctantly did some shopping for our BBQ the next day. Then we decided we wanted a Michelada, but couldn’t figure out where to go other than Palmview, so we ended up at El Huachinango restaurant. I couldn’t complian about the food (a botana for 2 serves at least 3-4!), or the drink. 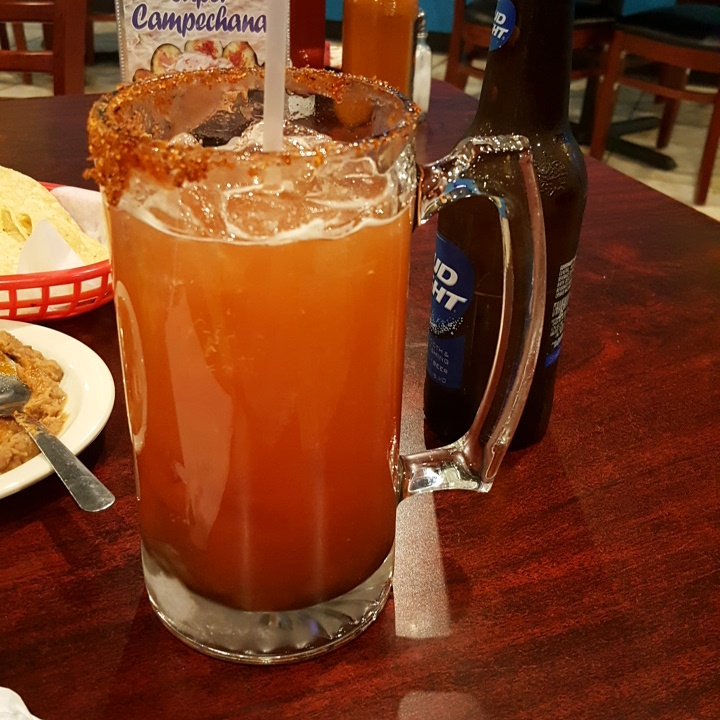 We woke up the next day, had breakfast and then I worked on the kids’ baskets. I already had all the candies and goodies separated, but hadn’t actually put the baskets together. And Mom wouldn’t let me forget it 🙄 . 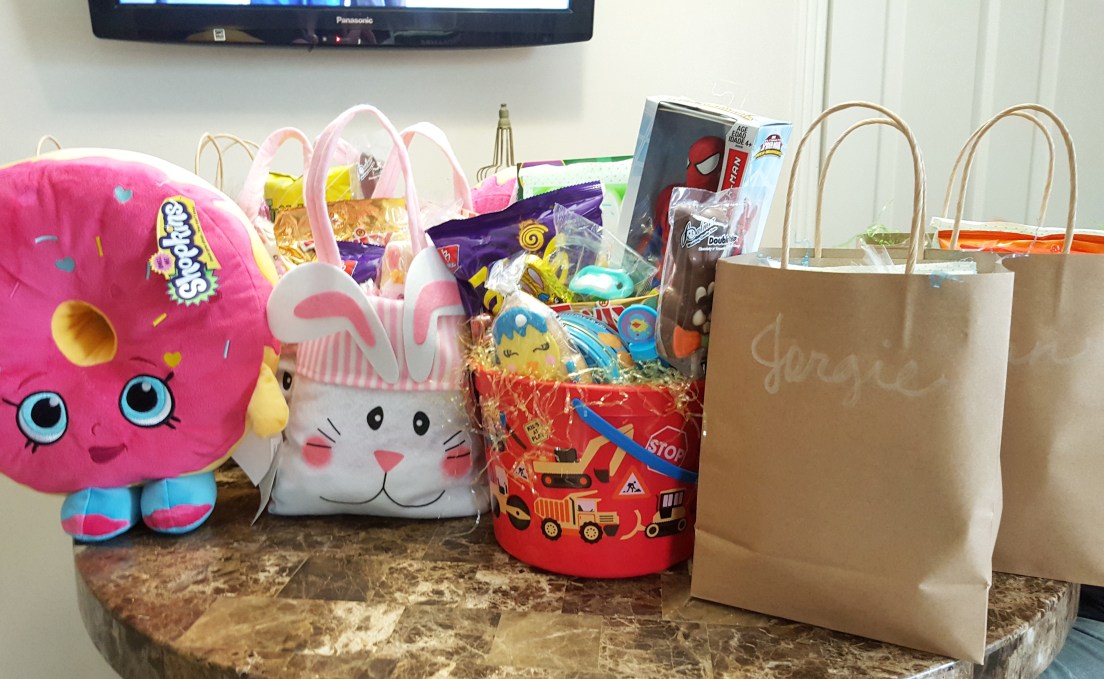 I was prepping a few things for our BBQ and made a Banoffee pie, and Jorge and Mom cleaned the porch before Jorge and I showered and picked up the kids. We picked them up about 2 hours after we had originally set, but we still ended up waiting a good while longer for Jorge’s boys. But, at least we were on our own schedule.

We got home and prepped the food and veggies. We’d be having burgers, hotdogs and sausages. 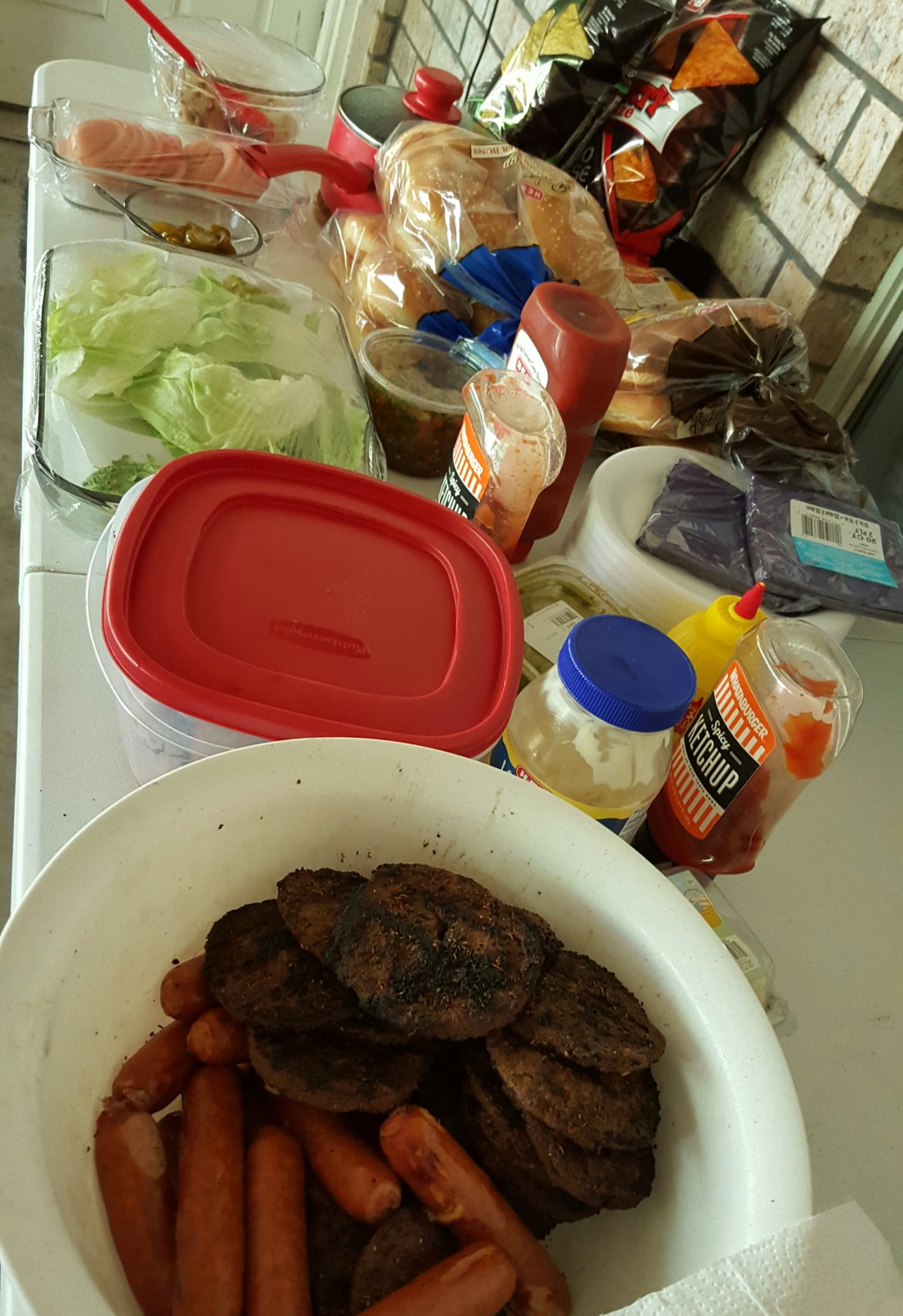 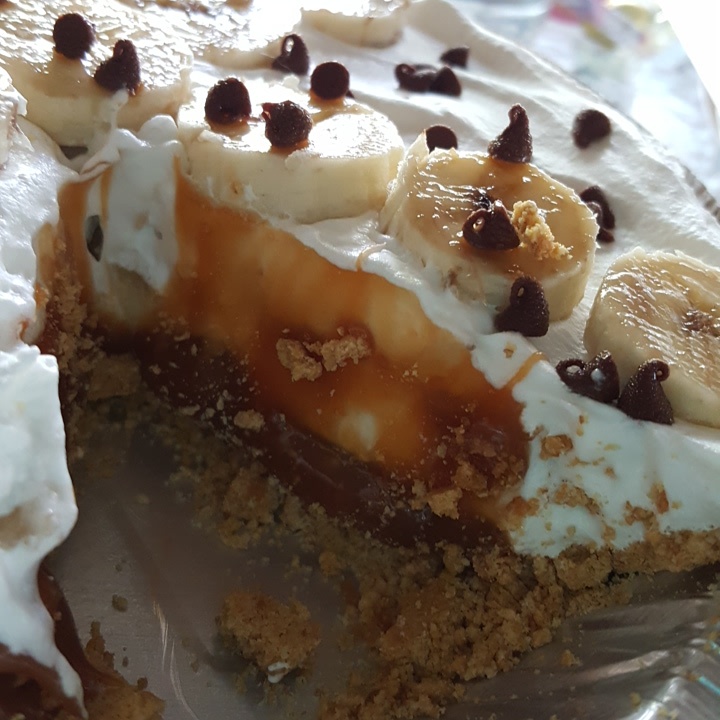 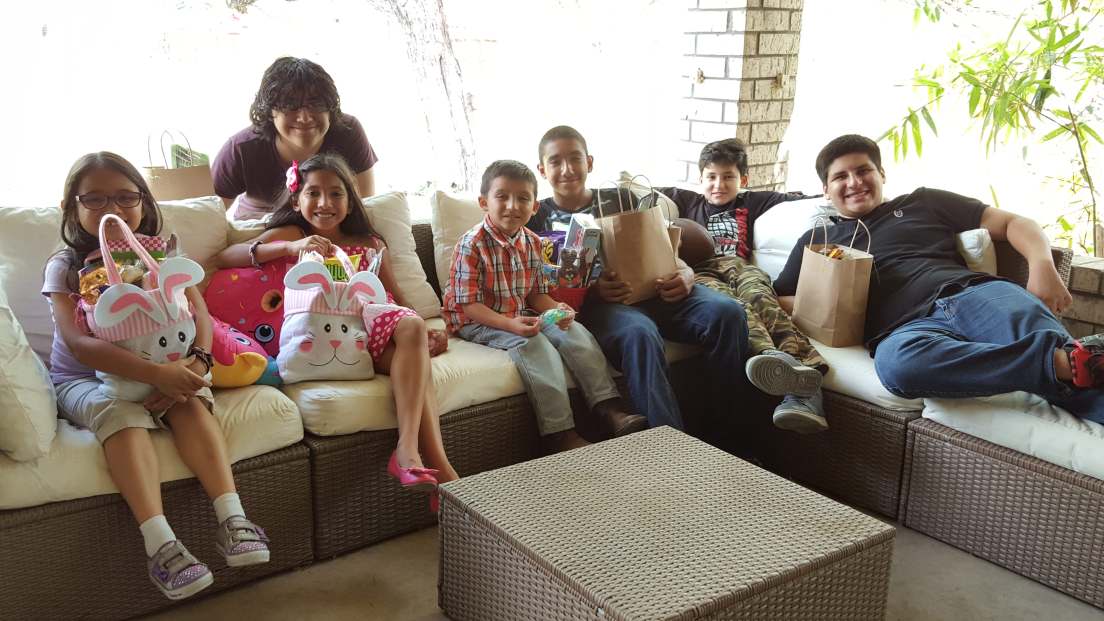 Then the big boys, who graduated into Egg Hiders, hid the eggs for the little ones. 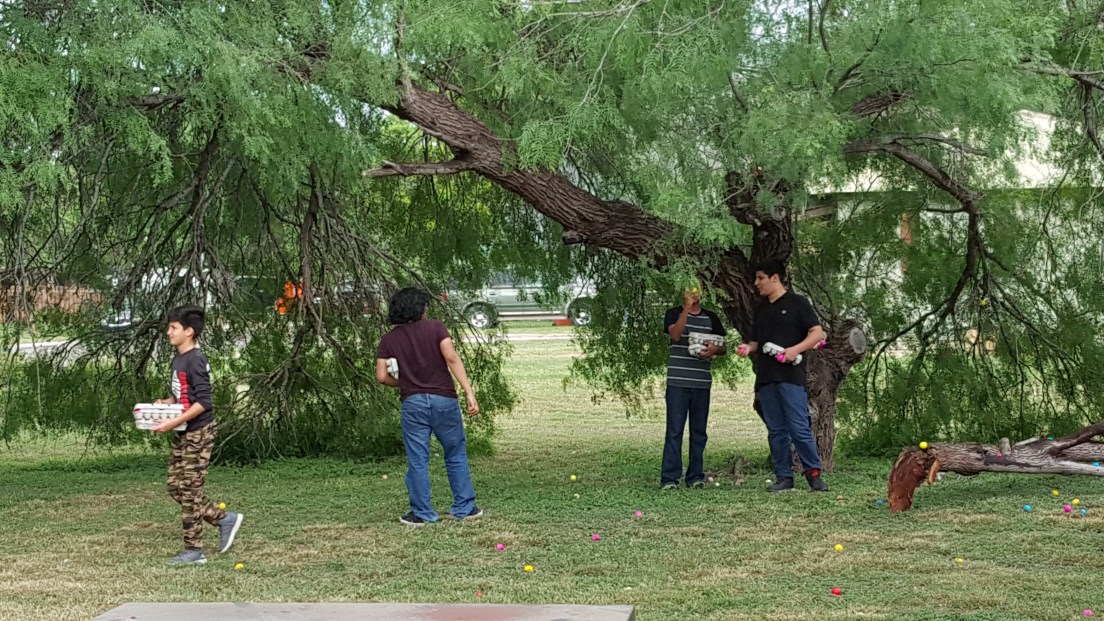 And then the 3-hour egg hunt and cracking began! 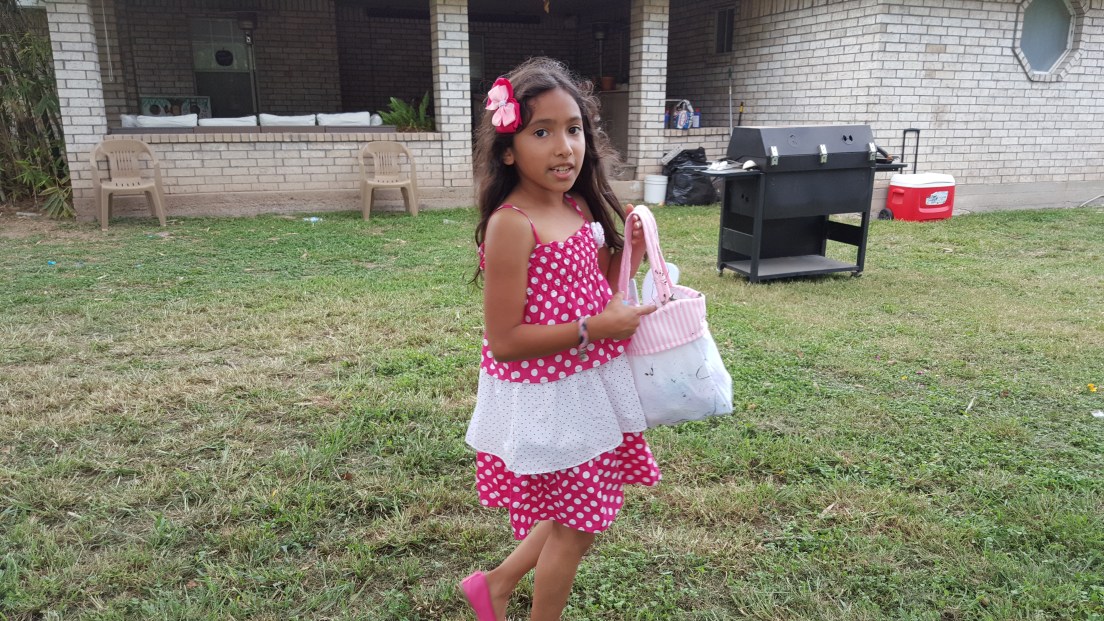 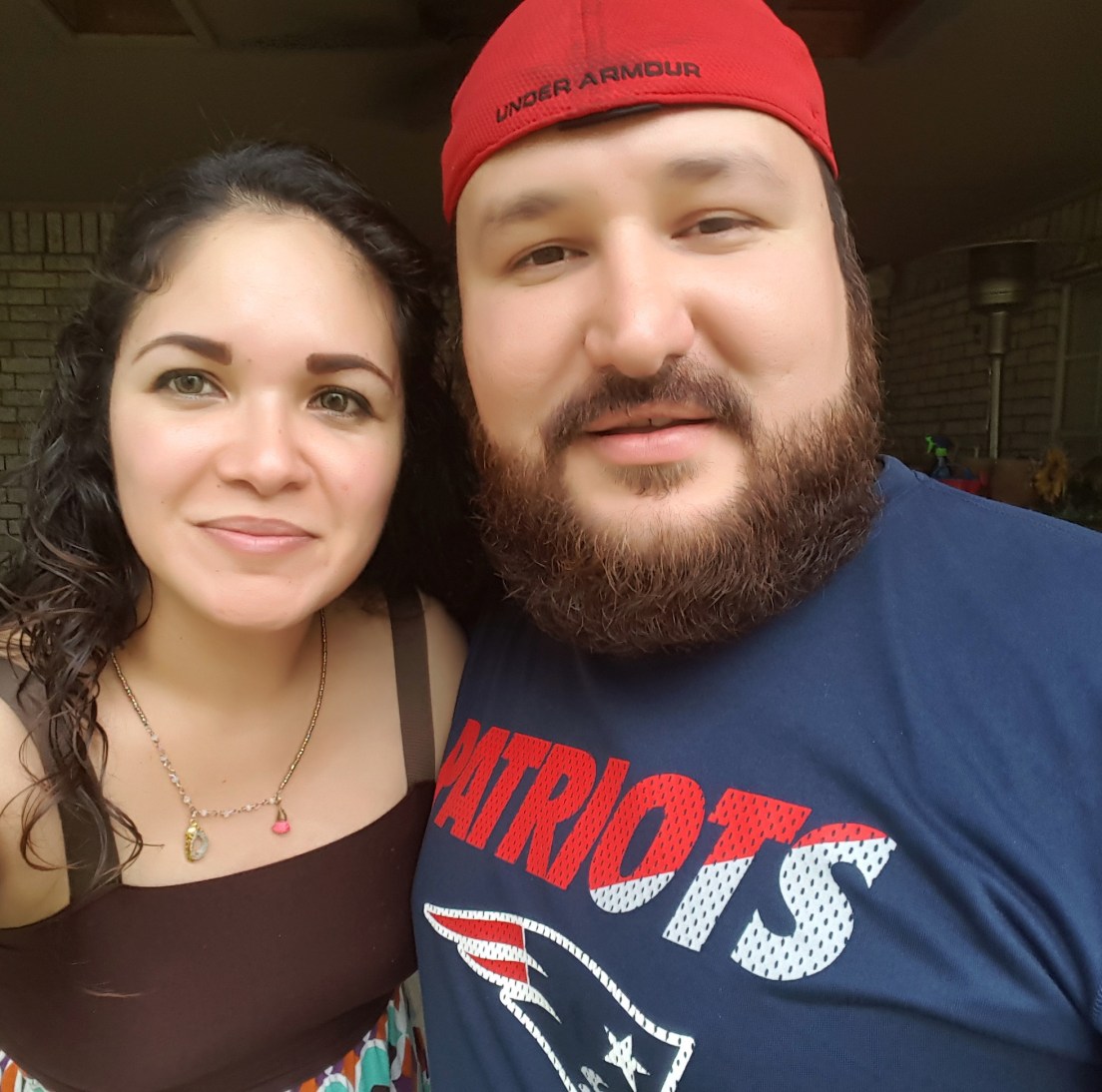 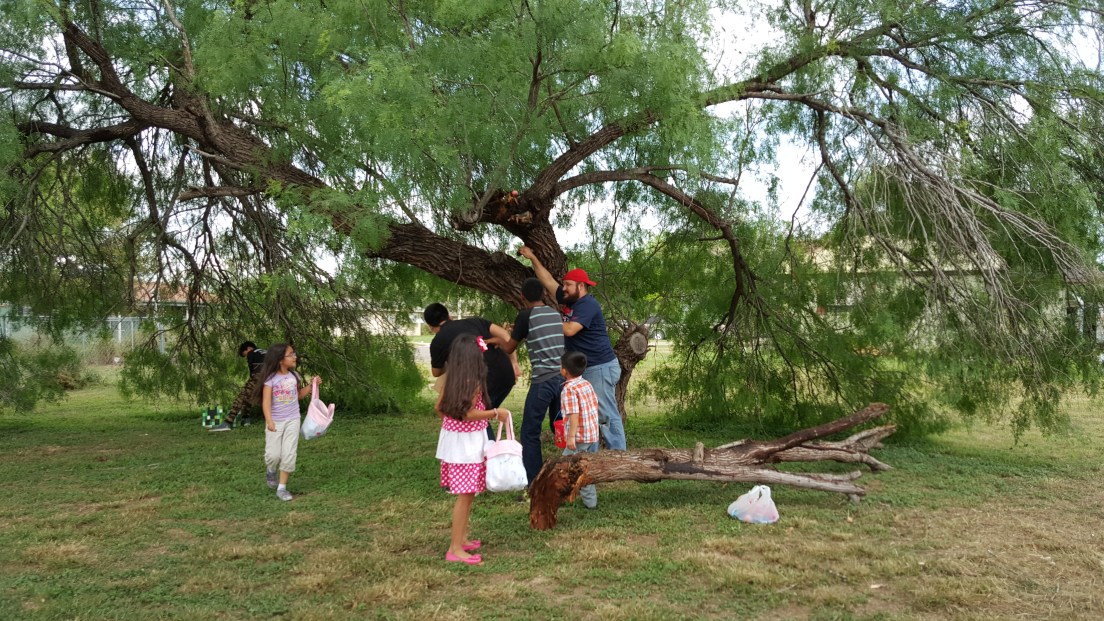 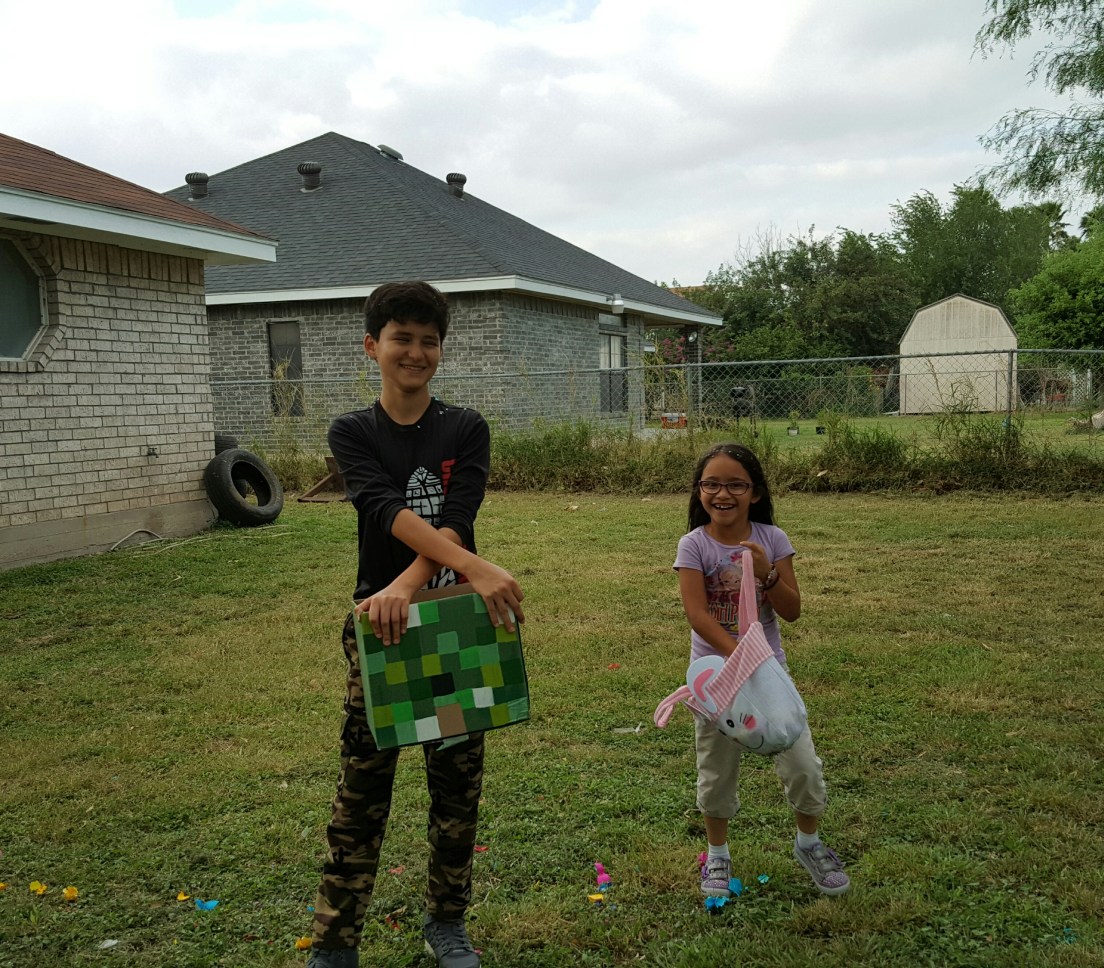 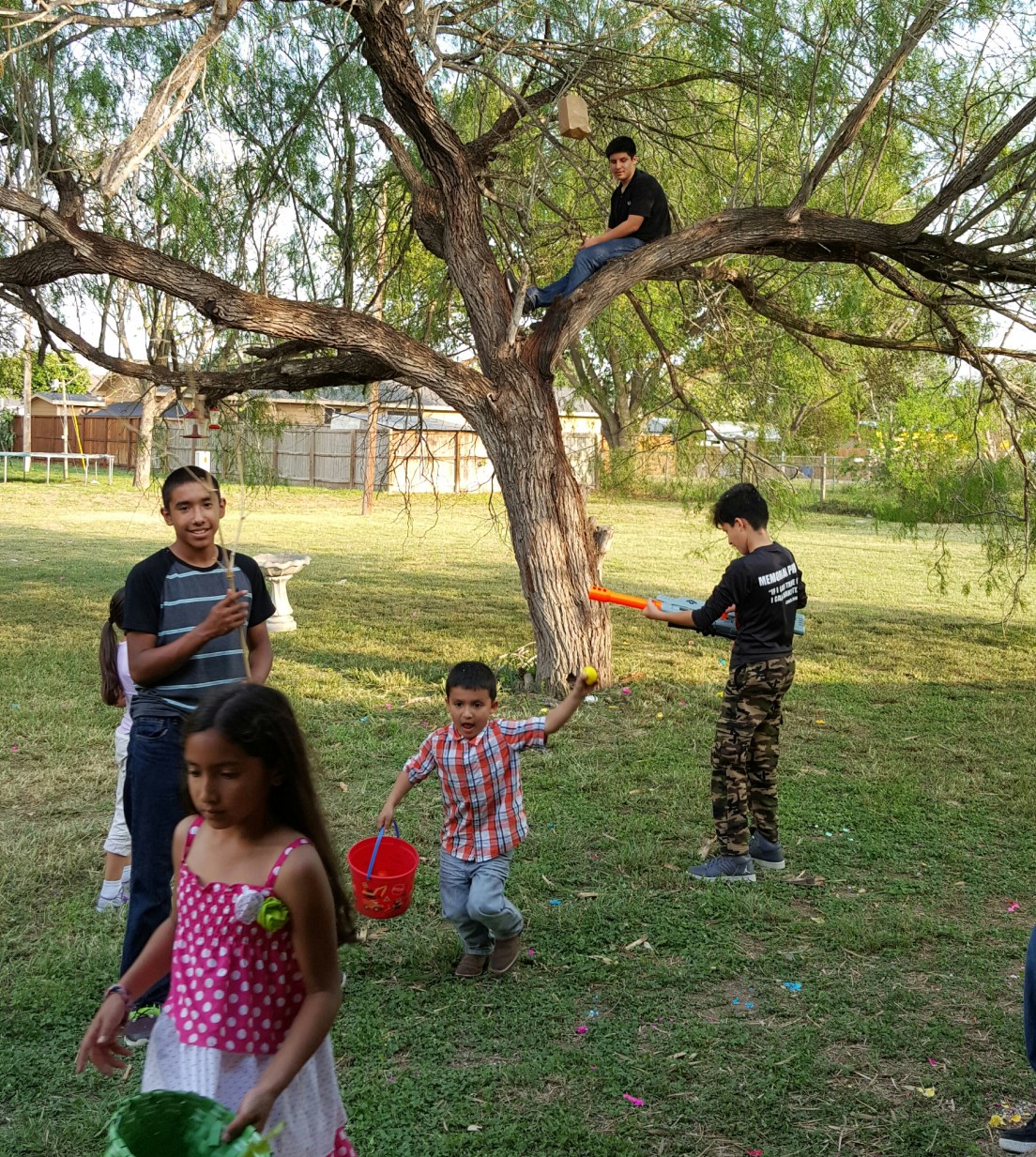 It got so crazy Jorgie ended up in a tree 😆 . 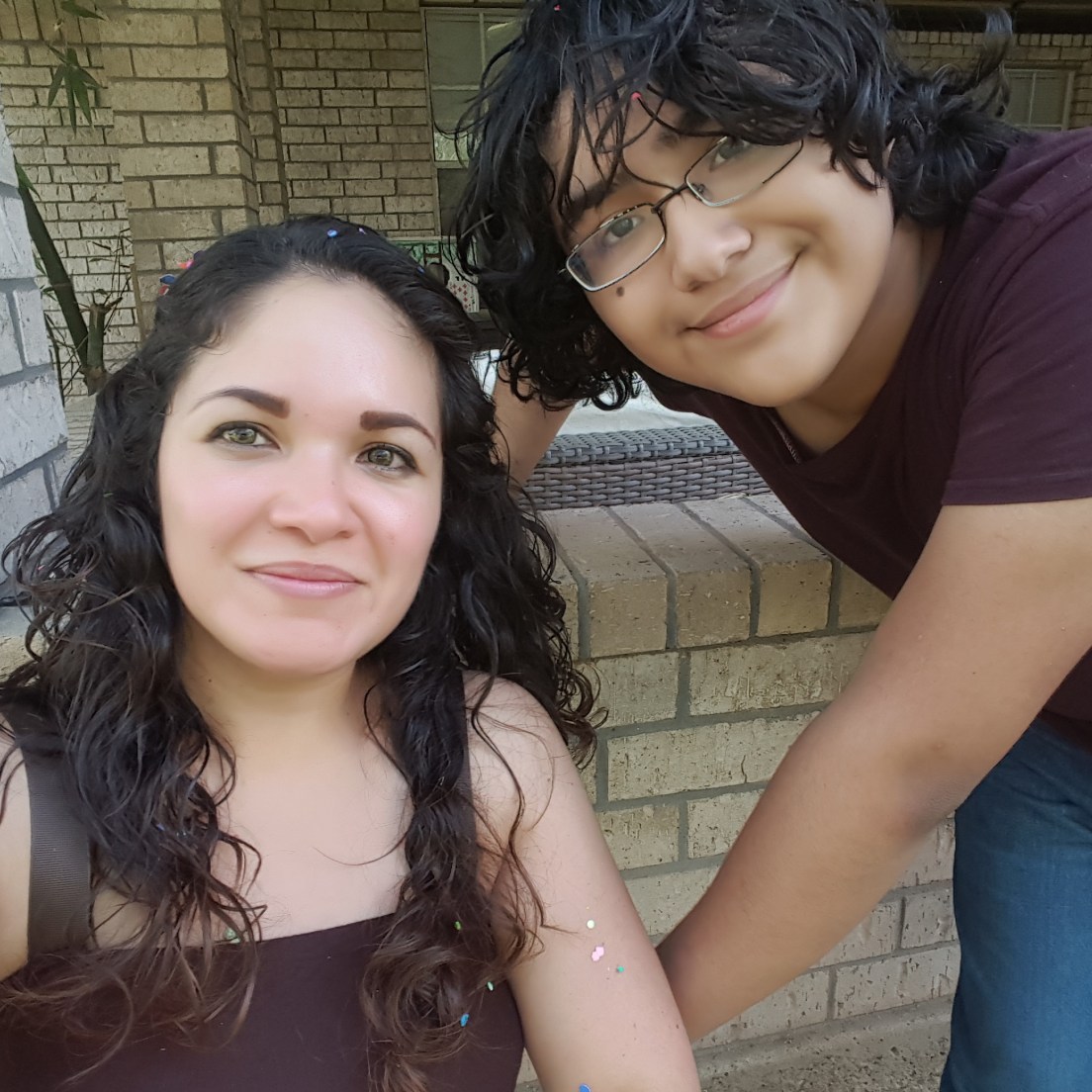 It was a great day! Everyone went in to start showering before The Walking Dead and then we readied ourselves to begin the week!